Anyone who’s been to Phu Quoc will tell you it’s hard to believe that there are so many beaches that are both stunningly beautiful and deserted in just one place. The triangular-shaped island has many good beaches, like Long Beach on the western side, which is also the biggest and where most of the hotels are located. Bai Sao, on the east coast, is a favourite spot – possibly the best beach on Phu Quoc.

Its fine white sand has many fans and most of the time you can expect crystal clear turquoise water – a postcard-like example of a tropical beach. Some others worth checking out are Ong Lang, Bai Thom and Bai Dai. Many of the island’s beaches are not marked on maps very well. Go explore – seek and you shall find.

Cao Dai Temple is an interesting religious site on Phu Quoc Island, boasting a bright technicolour exterior and relics of prominent religions from around the world. Founded in 1919, Cao Daism is a monotheistic religion which combines Hinduism, Judaism, Zoroastrianism, Buddhism, Taoism, Confucianism, Christianity, and Islam. Basically, the central tenant of the religion is that we

Dinh Cau Rock, also known as Cau Temple, is an odd-shaped natural formation in Phu Quoc Island, which local fishermen pray to before embarking on fishing excursions. Located just next to the Duong Dong Fishing Harbour, it features a brightly-coloured lighthouse and Buddhist shrine, making it a popular photography spot among travellers. 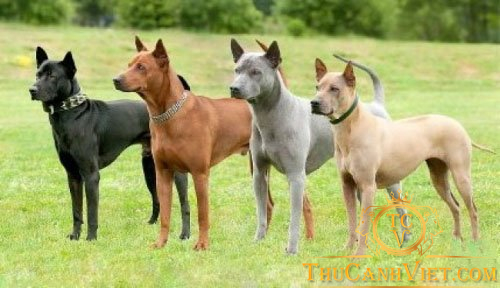 All around the island you can’t help but notice the dogs with a Mohawk running down the length of their backs. They are Phu Quoc Ridgebacks a recognised breed that is native to the island. There are only two other breeds of dog in the world that have a similar distinctive Mohawk, they originate from Thailand and southern Africa. Phu Quoc Ridgebacks were originally wild dogs that were, over time, tamed by humans for hunting.

Duong Dong Market is Phu Quoc Island’s busiest and largest outdoor market, where travellers can experience the local lifestyle and purchase a wide range of fresh produce during their holiday. Set along Tran Phu Street, Duong Dong Market features a wet zone that’s set close to Duong Dong Port, where you can see throngs of fishing

The local’s will be pleased to see you, especially if you buy some of their pearls.

Long Beach is a 20-km-long coastal area on Phu Quoc Island, where you can find swanky beachfront resorts, beachfront restaurants, cafés and bars with breathtaking sunset views. Also known as Bai Truong, the beach is still relatively pristine with plenty of palm trees and soft sands.

There are several pagodas and temples around the island that offer insights into Buddhism. In Duong Dong Town there’s Sung Hung Pagoda which is surrounded by large trees. A well known monk built Hung Long Tu Pagoda. He chose the site, located 5km from Duong Dong Town, for its peace and tranquillity. There are several other temples dotted around the island which welcome visitors, however you should not have bare shoulders or wear shorts when you visit.

Vietnam is the world’s leading exporter of black pepper and best quality harvest comes from Phu Quoc. Farms can be seen all over the central and northern parts of the island.

Those with a culinary interest can have a guided tour of a pepper farm to see the whole process in detail.

Phu Quoc National Park comprises more than half of Phu Quoc Island’s northern region, where adventurous travellers can enjoy a range of outdoor pursuits throughout their tropical vacation. Declared a UNESCO Biosphere Reserve in 2010, this massive natural attraction spans over 314, 000 square metres of unique flora and fauna, evergreen forest, and dense mountain ranges.

Built in 1949 by French colonists, it is believed to have

Accessible within a 20-minute drive from Ong Lang.

Suoi Tranh waterfall is around 7km east of Duong Dong. Once you’ve paid the small entry fee it’s a 10 – 15 minute walk along a well trodden path through the jungle. There are many rock pools in which to take a dip, at the top there’s a 4m waterfall (sometimes from January to May water.